Some of you know by now that I recently published the 2nd edition of my book Creating High Performers – 7 Questions to Ask Your Direct Reports. This is the story behind the book as well as how you can use the questions to improve your organization. 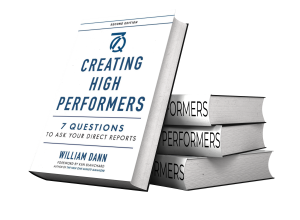 Well, first of all, graduate school taught me nothing about leadership and supervision (rather like the experience of most folks entering management). I was on my own and made mistakes early. The mistakes were painful lessons, both for me and for the poor subordinates who suffered from my lapses and missteps.

Far too late in my management career, I discovered Ken Blanchard’s Situational Leadership II model (Ken Blanchard, Leadership and The One Minute Manager (updated edition), William Morrow, 2013). I had known Ken personally from high school days, but had lost track of him when I went to Alaska’s bush. His model gave me a theoretical foundation that is still the basis for my own leadership practice and my teachings. But, I continued making mistakes.

The path to the 7 Questions and the Question Method

With each gut-wrenching mistake, a new lesson was learned. I made note of the leadership action I was missing in each case. My thought was that had I successfully filled in the gap that each missing action addressed, there might have been a successful outcome, a happier ending.

The missing actions turned into questions leaders could ask subordinates in order to determine when/if they needed to adjust their leadership approach. Originally, there were 5 Questions, which slowly grew to 7 and then morphed into the Question Method tool we coach clients in using.

Each mistake on my part had led to an upset with an employee and in some cases, a termination. Each termination was fraught with guilt because I knew a fair portion of the fault lay with me. But, it was not possible to “put Humpty Dumpty back together again” and ways were parted.

Over time, I grew more timid about confronting subordinates with what I viewed as unsatisfactory performance. Instead, I would go into self-reflection and be frozen with self-doubt that rendered me unable to act.

I then started employing the 7 Questions to help me determine how much of a subordinate’s performance problem was a result of my mistake or lapse vs. how much the employee was responsible for. This became the path to certainty and decisiveness for me. I was no longer frozen.

I started adding the Question Method to the leadership workshops I was conducting that were based on Blanchard’s model. I always began my workshops with a question of attendees, “what leadership problem or question do you want addressed/answered before we leave this session.” Consistently, the number one question was “how do I know when to give up on an employee?” or “how do I know when poor subordinate performance is not my problem?”

So, I began including a handout and explanation of the Question Method at the close of the workshop, and what I kept seeing and hearing on evaluations was that that tool was the most valuable piece for students. Many encouraged me to write about it, which eventually prompted me to bring the book out of my head and onto paper.

I would also add that one client followed my suggestion and implemented the Question Method as a replacement for their annual employee evaluation and got a very positive reaction and result from doing so.

Thus far, the book is getting very favorable reviews and moreover is being used, which is most gratifying.

What you can do to

Well, of course, order the book.  We also have a two post series that covers the the 7 Questions and the Question Method. You can find the first post here and the second here.

As you begin to use the tool,  I am very interested in hearing your experience in putting the 7 Questions to work. My goal is to create a dialogue that ultimately leads to refinement of the application of the Question Method model. Thank you in advance for being of assistance in creating this next iteration. You can reach me via e-mail.