Employees at Both Ends of the Performance Spectrum

In our last post, we highlighted Bill’s 2nd edition of Creating High Performers: 7 Questions to Ask Your Direct Reports.  We want to give a brief introduction for our blog readers to several of the keys you will find in the book, with some takeaways you can put into practice now. In this post, we cover what you do with employees at two ends of the performance spectrum – those already at peak performance and those who “Can’t do” because of a lack of confidence.

First we’ll focus on those already at peak performance. In the book, Bill’s emphasis is on how to move your direct reports to high performance, i.e., to identify what authority or tools they were missing, where they weren’t clear on their responsibilities or what decisions from those higher up were needed for them to move forward. But what is also addressed are those cases when an employee is already meeting the performance standards in their work.

If all the answers to the 7 Questions are yes, and the employee is at peak performance, the manager’s role changes to support the staff member to get to their next role. You shift the questions to their personal career goals. “How can I as your manager help you get to where you want to get?” Ask the employee what their learning goals are, the ambitions they have for their work. Then, the two of you work together to lay out the plan for them to gather the skills and qualifications to get to that next level.

But what if they aren’t interested in a “next level”?  Says Bill, “We talk a lot about this in both editions. There is a real difference between technical work and managerial work, a different set of values, skills, etc. We tend to get our managers by selecting the best technical performers and putting them in a position to manage people, and sometimes they are just not suited for that. Often they don’t really enjoy relating to people, particularly in a managerial role. 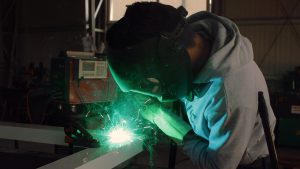 Developing other people is not what they want to do, but rather they are more interested in being a good mechanic or nurse or engineer, staying right where they are and improving their technical proficiency. As long as the employee is ok going forward doing that, i.e., you are not thwarting their ambition, then that is fine. Those employees are going to be happy and engaged and productive where they are at. Typically what elevates someone in most organizations is to supervise other people. And that step is simply not for everyone.

Bill recalled an example from his early days of supervision at a hospital.  “I started a program for everyone in the facility to move up the career ladder and I remember the feedback from kitchen staff that they were perfectly happy where they were.” Bill and his project team thought the kitchen staff must not have understood the offer, so went back to ask them again, ‘Where do you want to go from here?’.  But to their surprise, they found the kitchen staff truly were happy in their role. The unfortunate result for Bill was that, in asking them repeatedly about their goals, he sent a message that what they were doing now was somehow not important or valuable to the organization, that they should want something “bigger and better”. The lesson, and what he discusses in the book is that if  you as manager find a peak performer who is perfectly happy where they are,  then you simply continue to encourage and praise their good work.

At the other end of the performance spectrum are employees who you discover through the 7 Questions to be can’t do or won’t do employees because of a lack of confidence. In the first edition, Bill describes employees who are capable of doing the work and know what needs to be done, but who aren’t doing the work because they simply don’t want to out of defiance or laziness or can’t because of personal issues.  These folks are “can’t do” or “won’t do” employees for a variety of reasons, and they require either strong support to resolve issues that are preventing their work or, in cases of defiance, termination.

In the 2nd edition, Bill introduces another group of employees who are “can’t do” employees, but this time it is because they lack the confidence to do their work.  They know what is expected and for the most part they want to do it.  They are missing the belief in their abilities and/or they feel that if they try and miss the mark, they will be punished or terminated.  The employees are intimidated, lacking confidence in themselves to be successful and therefore won’t try.  Think public speaking or challenging technical work. In the 2nd edition, Bill gives insight and questions geared to get at what’s behind an employee’s lack of confidence and how to get employees to overcome it.

Both types of employees – the satisfied achievers and those lacking the confidence to succeed – are covered in more depth in the 2nd edition. They are two ends of a wide spectrum of the employee performance. Which brings us to managers, the topic of the blog post #3, The Role of the Supervisor. If you want more information on getting a copy of Bill’s 2nd edition or are interested in a PDF of his 7 Questions, contact us.