A Problem for Political and Business Leaders Alike – Execution 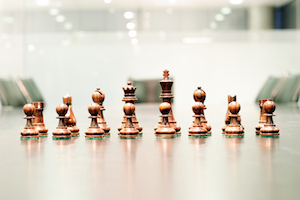 Over the last year, I have had extensive, first hand exposure to the inner workings of political leadership at the chief executive level, while simultaneously studying behavior via broadcasts covering political analysis. I have noticed a fascinating pattern at play that stagnates productivity – one that can be paralleled in the business world. This post is aimed at defining the pattern and how to break it, to the benefit of political leadership as well as those in business who are stuck in the same trap.

The challenge for chief executives in government is that they have had to play a long political game to get elected. In playing that game, they have surrounded themselves with those who relish and make a living at that game, e.g. advisors, campaign workers, fellow politicians, lobbyists, etc. Don’t get me wrong, I admire those who commit their lives to politics, to working for a better society that benefits us all. However, doing so brings with it certain shortcomings.

For those serving chief executives, winning the game involves finding and securing passage of the right policy. The trap? Once the policy is passed, the “game” ends, the win is secured. But it shouldn’t end there. The same situation can happen in the business world when a new system, process or program is instituted without regard to explaining the “why” or monitoring the “how” it is put into place. Without doing so, there will not be alignment to the change and execution will be negatively impacted or even stopped.

Real success is in execution

Not given its due by these political advisors or business leaders is the importance of execution. Wise business and political leaders understand that it is all about strategic execution. Superior execution of an inferior strategy will outperform a superior strategy not executed well every time.

What I have witnessed over the past year from the national to the local level of government is a chief executive focusing too heavily on policy vs. execution. Coming in to office, a new official seeks to surround him or herself with cabinet or advisory board members who will serve as the “team”, but once in office, the palace guard of political junkies becomes the “team”. We see this in successive Presidential administrations as the White House staff influence and importance grows while the Cabinet influence and power wanes. I have seen the same phenomena on a state level.

The end result is that government often doesn’t function well. Witness the debacle over the registration web-site associated with implementation of the Affordable Care Act or the breakdown in the Veterans Administration.

Same can happen on a business level when leadership fails to focus on execution. Have you witnessed the C-suite developing a strategic plan only to leave it untouched on the shelf, or buying into the next big trend, learning the tools but failing to implement them? Good business leaders know the power of implementing programs and procedures well. They are more effective at measuring results and holding their direct reports accountable for results. The equivalent in government should be the members of the Cabinet who are responsible for running the various “subsidiaries” of the enterprise.

There have been numerous attempts to reform government by bringing business principles into government operations but few succeed. Rather, they become passing fads. Elected chief executives don’t give them attention and, if they do, may well be voted out of office before the change is operationally stable. Though a CEO may not be voted out, his or her power as well as the success of the organization hinge on effective execution of sound principles.

What’s the cure? Not sure but it seems to me that in government the position of chief of staff to the chief executive is the potential fulcrum for balancing the competing elements of a) sound policy and the politics of getting re-elected vs. b) the need to execute well in order to fulfill your covenant with the public who elected you. In business as well as government, measuring impact or results is an essential, effective step to getting focus onto successful implementation

I am also a firm believer that Cabinets need to have heightened power and influence. This could lead to two important outcomes: a) heightened awareness of the needs/wants/concerns of those served by government as the Cabinet members are closer to them (vs. policy influencers whom the policy advisers in the chief executive’s office are communicating with) and b) heightened focus on execution and problem solving associated with same.

I would be interested to hear your thoughts. Drop me an e-mail to join the conversation. If you are in the middle of an execution crisis and would like a sounding board, I would be happy to give you some solid steps to move forward.