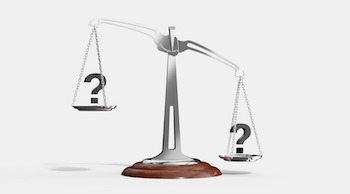 Policy is critical. Yet, there is a balance between too much and too little, and it’s essential that you understand this balance when you develop and implement policy. Too much policy stifles creativity, innovation, building of sound judgment and morale. It can sap the energy out of an organization.  Too little and the organization is a free fall of ideas without the focus or parameters to keep the organization moving forward strategically and purposefully.

As a board, when you operate without the appropriate policy, your relationship with your chief executive is at risk, and essentially, you might not be in control of your organization.

A board was debating a bonus program for employees with its relatively new CEO. During the debate, one of the more senior directors said that a bonus program had been approved some years before. She then stated what she recalled the provisions to be. No one else in the group had been there at the time, so no one could dispute or reinforce the recollection.

What’s worse is that the board had no compilation of its policies.

That left the group with two options:  1. accept the recollection of the senior member, or 2. table the item until the board secretary could go back through years of minutes to try to find the relevant motion.

Neither of these alternatives is a good one. I call it “management by folklore.” A CEO complained to her board that a director was engaging in ethics violations. More specifically, that the director was bad-mouthing the decisions (and non-decisions) of the board to shareholders.

The board went into executive session to address the matter, only to realize that it had no policies that defined the following:

The result, of course, was that the board was unable to take any action at all, at the time. Instead, it summoned a lawyer to the next meeting to advise it. Eventually, the board adopted the appropriate policy. However, it was not able to deal with the behavior until six more months had gone by. That meant six additional months of bad PR and continued erosion of shareholder confidence and CEO and employee morale.

What happens when policy is too stringent?  An example:

A CEO reported to her board that two potential deals had been lost because she (the CEO) did not have the appropriate authority to act. A special board meeting was not held, and the delay before the next regular quarterly meeting was too long. The deals went to another firm. Ultimately, the board loosened its restrictions on CEO authority, enabling that officer to enter into deals. But the damage had already been done.

You know you have too much policy, or that your policy is too stringent, when one or more of the following conditions exist:

How do you know if you have too much policy – or too little? The rule of thumb is that you need more policy when one of the following two criteria apply:

Need help assessing the right amount of policy for your situation? Contact us for tips and steps you can take.