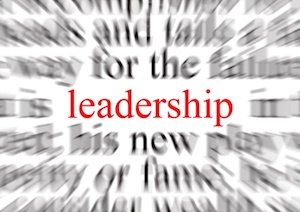 The dictionary definition of lead includes “to show the way to by going in advance, to guide or direct in a new course, to guide the behavior and opinion of or to inspire the conduct of”. The first depicts the role of a scout, the second that of a commander and the last that of a motivational speaker. However, I think these all miss the mark a bit. You haven’t led if the followers haven’t followed you. You can show the way, but if they don’t go that way, have you led? I can inspire or guide behavior but if the behavior hasn’t occurred, have I really led? The common understanding in organizations is that the leader shows the way and inspires, then leaves to the managers the job of getting from here to there. My take is that the leader hasn’t finished leading until he has accomplished getting his group to that new end state. And, it is here that the rubber meets the road…and leadership often skids to a stop.

I rather like the notion of leadership depicted in the “adaptive leadership” model of Heifetz and Linsky¹ as the “practice of mobilizing people to tackle tough challenges and thrive”². This makes two distinctions. First, to be truly leading you need to be taking the group where it would not go on its own. If you are simply “guiding” by solving the next problem with methods you have used previously, you are managing, not leading. Secondly, you haven’t led until you have achieved an intended outcome.

There are countless books on resistance to change, including Spenser Johnson’s Who Moved My Cheese. But Heifetz and Linsky go a bit further here to point out that those who have granted you the right to lead, be it a board of directors or a group of followers, will take you out as leader if the path you choose is viewed as threatening their core values, beliefs, safety, security, etc. Ichak Rabin was not assassinated by an enemy, but by a follower who felt betrayed. So, followers are looking for safety rather than taking risks in order to thrive. It is the threat of being taken out or losing one’s leadership position that is the barrier to true leadership.

Let’s look at our political debate over the national debt. Both sides agree that we cannot continue as we are and that doing so will spell fiscal ruin. But, both sides are entrenched based on not wanting to give up on core beliefs and the benefits (i.e. safety) that accrues from the current state of things. They try to market their positions as solutions, but the facts are clear that neither is really offering a solution. Republicans won’t fix the deficit by cutting both taxes and government spending. Democrats won’t fix the deficit by raising taxes and raising government investment to spur growth. To get to a solution, both sides are going to have to disappoint their followers and ask them to give up on a core belief or benefit. But, the fear of losing power if they do so is what has both sides in the current gridlock. A gridlock that will send us over the cliff, which everyone acknowledges.

I see this same gridlock within organizations. Rarely do you see the kind of leadership exemplified by the auto industry in overcoming gridlock with unions by an agreement that had the unions give up some benefits and ownership give up some power. To get to such a solution requires real courage. More often I see leaders choosing not to tackle hard issues or make tough strategic calls. As I talked about in an earlier blog, they prefer to play small ball as that is the path of least resistance and the greatest safety for the leader.

True leadership involves sitting down with all sides to an issue and negotiating trade offs, so that a real solution is possible. It is tough, painstaking, tortuously long and often disappointing work. When I have chatted with leaders that have been successful, they often speak of how the process has tried their patience, and they were often tempted to simply dictate to “just do it”, though they knew that would only inflame the opposition.

One of the prerequisites for becoming a true leader is to be willing to suffer the loss of job or power if you fail. Fear of failure will stop leadership efforts in their tracks. When contemplating asking others to go where they don’t naturally wish to go, you have to ask yourself, is ultimate success here worth risking failure or loss of power/position?