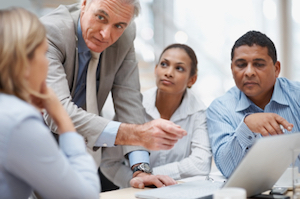 A recent experience at a meeting of the board of directors of a client gave me a fresh insight into how leaders in all walks, in this case a board chair, get into pickles. Also, how they get out of them.

The chair of this group is very committed, well-intentioned and experienced, much like the majority of CEOs we work with. The challenge for him has been giving up the right to advocate for or against an issue, in exchange for achieving what is essential for board chairs: impartiality on all issues. Like many chairs, he is highly influential among his constituent base, holding several positions of authority and influence.

Though CEOs are not expected to maintain impartiality on issues as are board chairs, they are influential. And more importantly, they are expected to hear and understand opposing views from within their team in order to mediate conflict and make sound decisions. So the experience I encountered in the board meeting and its eventual conclusion felt all the more relevant to share with our blog readers. In this case, an issue was put on the floor, and one board member took a strong, reactionary position. The chair, feeling the need to keep the course of discussion in safe territory, tried to balance the conversation and bring it back to neutral ground by offering a contrary opinion.

At this point, the other board members became observers of the game being played by the two combatants. A healthy process leading to alignment on a quality decision had been derailed. Time was wasted. Staff was demoralized, and the chair lost position, as he struggled to defend himself for appearing to attack his fellow board member. The board saw the good intentions of the chair, but knew he should not have gotten into this controversy. Worse yet, the other board members found themselves leaning toward protecting the perceived victim of the chair’s onslaught of rational thought.

Same thing can happen at a leadership meeting in an organization.  When emotions run high on an issue, a leader’s primary role is to assure all view points are heard, considered and understood – not all agreed to, but understood. From that point of understanding, rational conversation can begin.

Thankfully for this board, a staff member noted that the concerns of the first board member could be incorporated into a compromise solution. This compromise would ultimately be an improvement overall, because there would be widespread alignment to that solution. Were it not for that insight, the “war” may never have stopped.

Giving up your right to be right

But alas, the chair could not contain himself. Rather than validating the other board member for his input, he continued on: “That’s all well and good but….”  (A word to the wise: “Yes, buts…” are relationship killers.) So, having for a moment escaped from war, we were back at it.

Thankfully, a break was called. I jumped from my seat and cornered the chair.

“So, let me ask you something,” I said to him. “If you want to create peace and stop these political attacks on you, which of the following statements would make the most sense?”

“Yes, good idea, but I still think we should not venture into this area because it is fraught with danger.”

“Thank you for your contribution. It is important that our solution address all viewpoints of our shareholders, and your proposed addition to our strategy does that.  Thanks for sticking with it and not giving up on your ideas about this.”

The moral of the story

The chair got my point. After the break, he gave that speech and his fellow board member literally glowed with pride.

The moral of the story? If you want to increase your power and influence, give your board or team the wins rather than taking them yourself. As a leader, hesitate to take credit, even if it is your idea. Rather, use questions posed to the group. Questions are non-advocating by nature, if you ask them properly, and will get others to see a broader range of options, encouraging the group members to think outside of a tightly held point of view.  Often, almost magically, you can come to a solution, you empowered your group and you retained your power.

As Lao-Tsu, the great Chinese philosopher wrote: “…When the best leader’s work is done, the people will say, ‘We did it ourselves.'” If you want to gain power, give up power. Those you empower will empower you.