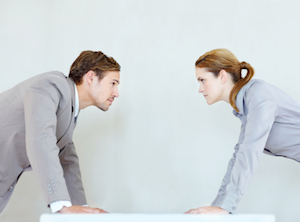 Successfully managing conflict in the workplace

Recent experience completing conflict resolution work for a long-standing client brought to mind that I ought to write something about how this gets started, continues and ultimately gets resolved. It is my belief that with the exception of a small percentage of our race, we humans are largely well intended. And, if we truly understood one another fully, conflict would be rare. So, what gets in the way?

Second, we fail to acknowledge what is being said to us as true for the person saying it. So, the communicator never feels understood. As frustration mounts, we each communicate less (“why say anything if they aren’t listening?”). We then fall into a pattern of communicating to others our frustration with the person we should be communicating with, which in turn leads to further reluctance to communicate (feeling guilty about not being truthful), and the relationship heads into a downward spiral.

It is bad enough in a marriage, parent-child relationship, etc. when we are in relationship 24-7. Now take that behavior into the workplace, into a work team, and the gaps become extreme. They can be debilitating for a team and thus leadership of an organization.

Conflict in and of itself is not a bad thing. There is positive and negative conflict. Positive conflict involves an open and honest exchange of differing ideas communicated with passion. Effective teams do this on an ongoing basis with no punches pulled. Negative conflict follows the pattern of covert disagreement, issues not raised or resolved.

The cure is simple, but requires courage. We feel guilty about not having said what we should have before and having instead complained to others. Broken relationships, however, can be repaired in a matter of hours. Employing a skilled facilitator to enforce the rules oftentimes helps. In the end, you discover mutual purpose and intention. New energy is brought to the relationship and the team. And, each party learns from the process, hopefully, to become less inclined to withhold truths in the future.

Conflict resolution is an essential skill for any team or ongoing working relationship. It overcomes those tendencies we have which don’t serve us well. Want to know more about the rules of resolution? Send me an e-mail, and I will forward you a tool we use within our team and with our clients.