HomeBlog-2CommunicationThe Power of Theory U

The Power of Theory U 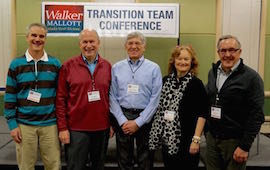 Recently, thanks to good friend and associate, Sarah Barton, I was exposed to Otto Shermer’s Theory U model for reaching generative consensus from widely divergent viewpoints. The theory tracked my own experience and learning about how it is that people come to agreement. The model is depicted below and begins with openness and active listening to others which leads to interest and suspension of pre-judgment of their ideas which in turns leads to openness to new ideas which, when explored together, can lead to generation of ideas/solutions never before imagined.

About two weeks ago, I was asked by the not-yet Governor-elect of Alaska, Bill Walker and his running made Byron Mallott, to design and execute his transition process. He laid out a bold vision for the conference and a set of principles that were very prescriptive. He and his advisors reasoned that no one had ever valued the work of transition teams in the past and that no member of a transition team had ever felt they had added value.

The Governor to be, Lt.-Governor and team wisely reasoned that Alaska is facing tough choices ahead due to a rapid decline in revenue from oil production that pays 90% of the bills of State government. Yet, he comes to office after a prolonged period of pitched political battles and partisanship on steroids. Unless he could find a way to overcome this, meeting the challenges ahead would not be doable.

We designed a process based on Shermer’s theory, put together a training program for the 17 selected chairs, delivered it in a quick 3 hours, offered ourselves as coaches (1 per six groups) ,and hoped for the best at the end of two long days.

I have lived in Alaska since 1968 and have seen major battles waged endlessly in most of the areas discussed.

I should also share that the first evening, four separate economists poured water on our parade by agreeing that we faced 50% or greater reductions in State revenue. Not exactly conditions in which you feel you can accomplish something. Maybe you can see it in the faces of those in the photos I have included. Miracles happened, that is what. Virtually all the groups were able to come to agreement on all the priority issues before them as well as on a recommended course of action for the incoming Administration. At the conference close, we all celebrated the fact that we had just made history, that we all were confident that Alaska’s future was bright, that anything was possible and that enemies had become friends. It was truly astounding.

If you need more proof, watch the next 100 days. Miraculous outcomes are ahead. Alaska may well show the nation what a non-partisan world can really create.

Why does this matter to you?

If you are facing divisive conditions, tough choices or simply very divergent points of view on major issues within the environment in which your organization operates or even inside your organization, I commend you to Shermer’s work. Or I encourage you to contact us on how we can bring the power of this model/process to the challenges you face.