HomeBlog-2GrowthlinesA Values Wall: How to Reinforce Your Core Ideology

A Values Wall: How to Reinforce Your Core Ideology 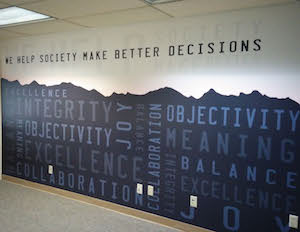 The importance of corporate culture

Readers who have been clients know that we give considerable emphasis to defining what James Collins and Jerry Porras define as “core ideology”, namely purpose, vision and values. In their book, Built to Last and in the wonderful summary article, “Building Your Company’s Vision”, the authors make the point that these elements “define the enduring character of an organization” and that “it is more important to know who you are than where you are going, or where you are going will change as the world around you changes”. “Core ideology provides the glue that holds an organization together as it grows, decentralizes, diversifies, expands globally, and develops workplace diversity”.

What we see in practice

Over thirty plus years of consulting, it has become crystal clear that without clarity and integrity of core ideology, no organization, no plan, no project will go forward successfully. Rather, efforts to reach lofty goals will be derailed by lack of commitment, disagreement and confusion.

The foundation of any significant effort by a group lies in understanding why we are doing it, what success looks like, alignment on strategies/efforts needed to get there.

I was recently asked to work with a group to develop a plan for a large-scale undertaking that represented meaningful change. In the weeks leading up to the project, disruption in the ranks mounted (a common reaction to impending but unknowable change). So, we changed the game plan to instead essentially define what we could call the “core ideology” of the project. But, within minutes of my initial interaction with the group, not even this outcome was achievable. Years of trying to move forward without having these elements defined had resulted in enough chaos and perceived lack of leadership that employees did not feel safe. So, I backed off even further to develop a set of agreements that, if adhered to, would create safety for a time so that the “core ideology” could be defined.

How to build and keep alive corporate culture

This question has become a fascination and a challenge for me. My goal for the year is to complete additional research and thinking on the question, and then to develop a set of posts on the subject.

But for now, let me share with you a few examples of how corporate culture is built and maintained:

For me, the more public you make your core values, the more they will be strengthened and the more leadership will be challenged if the organization is not living them. To keep the values and the organization alive, make them ever present.

Your thoughts and experience?

I would be interested to hear your questions or to learn of your experience with defining and maintaining corporate culture. You can reach me via e-mail. I pledge to keep you posted on what I learn going forward.

When we have more, we’ll let you know