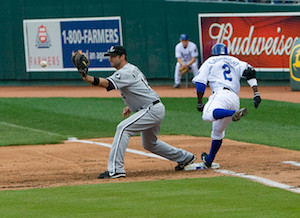 Great leaders are willing to take worthwhile risks, even at high cost

Wikipedia: Small ball is a baseball offensive strategy employed in which high value is place on individual runs and attempts to score them without requiring extra base hits, or sometimes without base hits at all…. Well, maybe a great strategy for baseball, but for organizational leadership or politics, not so much. There was much talk about President Obama’s recent State of the Union speech being an example of playing small ball. I concur with that assessment and join with the critics from within his followers who registered disappointment. I raise this as an example that leaders of all stripes can learn from.

First, it is important to distinguish leadership vs management. Leadership is about taking followers to a place that makes them uncomfortable, uncertain, unsure of whether to continue support of the leader. Inherently, leadership is risky. Management is about solving problems using existing methods. No risk. No innovation. No change that threatens loss of followers.

Returning to politics, something we all observe in common and can learn from, our country needs leadership. Both ends of the political spectrum are screaming for it, they just see a different destination. Given the disappointment with lack of leadership and hunger for it, why don’t “leaders” lead. I believe it is rooted in the risk of losing followers and that the game of winning for the party trumps winning for the country. It’s about being “right” at all costs.

Rather than embrace a grand bargain such as Simpson-Bowles, both sides pull back from the brink, fearing they will lose their base. And, so the nation continues its march over the brink, with followers in hand.

Obama is fading into irrelevance because we don’t want a manager. We don’t want another “leader” who is satisfied to make the other side wrong rather than truly deal with them. He’s willing to deal with Iran, but not with the Tea Party. Rather than really push to engage and move them, and risk failure in doing so, he is content to simply create a platform for Democrats to win in the next election.

Whether it be politics or business, leadership and innovation involves betting the farm, the leader putting his/her own future at risk. Steve Jobs did it over and over again. It made Apple’s board of directors nervous, so they removed him at one point only to find that innovation, the true source energy for the company and hence stock value, came to a halt. They later brought him back, and he went on to create the most valuable enterprise on the planet.

Obama was masterful at creating a loyal following. He could have used that energy to transform our nation. Yes, the other side doesn’t want him to succeed and will fight his solutions. But what both sides share in common is that they are both failing in the eyes of the American people.

Bill Clinton was in the pits post mid-term elections and the Monica Lewinsky scandal. He took the risk in tilting to Wall Street and embracing welfare reform, and is considered one of the consummate politicians of our time.

Leadership requires abandoning your existing methods and solutions, and taking a new route. Rather than fight over cutting tax breaks vs. cutting taxes, agree to abandon that game and start a new one. That is what Sen. Coburn has proposed. Sunset the tax laws and build a new one from the ground up. Clever. It is hard to cut a benefit once it is established. Starting from the ground up allows lawmakers to eliminate the convoluted mess and for leadership to flourish.

Inside your organization, likely followers are hungry for bold leadership while being frightened about what would happen to them if it was practiced. Fear of the unknown can be powerful and potentially dangerous to leaders. Often political figures in history have been assassinated by followers who felt betrayed rather than by the opposition.

The dance for leadership is about pushing your followers and risking you will lose them. Not for the faint of heart.

So, ask yourself, are you playing small ball? Examine your aspirations and your legacy as leader. What prevents you from being in action to get there? Have you asked your team if they are willing to take the risks in going there with you? Have you challenged them if they aren’t? What blocks them? Is there a new approach that could get you there?

I am interested in hearing back from you on this. It is an important dialogue. Send me an e-mail with your thoughts.