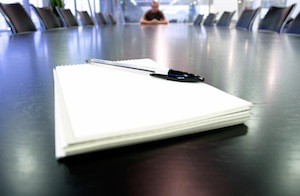 As Black Friday looms in the near future and the holiday rush kicks into full swing, I thought I would join the call of those wishing to “keep it simple”, but with a different spin. How do you keep it simple in your meetings or in the boardroom?

Those of you familiar with my approach to Robert’s Rules of Order know that my philosophy is to keep it simple. Robert’s Rules become intimidating and unworkable for most groups when the group tries to deal with the minutia of the kinds of pitched battles associated with, say, a filibuster in the U.S. Senate. Robert’s Rules is designed to handle these situations, certainly, but the details of the rules can be overkill for groups that operate on more of a consensus basis. An understanding of, and adherence to, some basic rules will serve most groups. It will also greatly aid group productivity, and it will reduce or remove the intimidation factor. To me, the key rules that groups, especially governing boards, need to operate effectively are these:

We have had several questions from clients in the past on some of the details of working this out. “Can’t we just discuss issues without having a motion on the floor?”, “Should we include opinions expressed by members in the minutes?”, etc.