HomeBlog-2GrowthlinesImplementing Change #4: Let Those Who Do The Work, Design The Work

Implementing Change #4: Let Those Who Do The Work, Design The Work 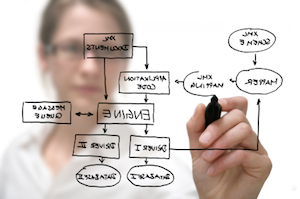 We are on the 4th post in our series on implementing change in the organization. In this post we detail the value in letting those who are already doing the work design the work and changes needed.

The two major sources of failure in implementing change are not empowering those doing the work, and, not handling correctly the human side of change. Avoiding these failures requires eliminating the dominant tendency of American managers to empower managers, rather than the workforce, and responding to a lack of cooperation with authority, rather than with understanding.

Our experience has been that overcoming these tendencies requires an outside agent to design and manage the process. It’s just too big a culture change to make without an outside catalyst.

A Case in Point

After years of watching state agencies fail at attempted change, and hearing from cynical state workers in planning or teambuilding sessions, we were, at one point, asked to bid on a major project to define and implement best practices in a half-dozen permitting processes at a major state agency. We declined, but indicated a willingness to take on the project if the agency would change its project approach. “Why?” they asked. We answered that the chances of success, if an outside consulting group imposed a design, were “slim to none.” We said that if they were willing to gather customer feedback on the existing processes, and empower employee teams now doing the work to design and implement the new methods, we would be willing to take on the project.

A long story short: All six permitting processes were re-designed and implemented. That saved the state more than 50 percent in personnel costs, and greatly improved customer satisfaction. The model has since been adopted by other states.

We’ve refined our process over the years, but the principles remain, and thus far, we are batting 1000 percent at successful implementations that reduce costs and improve outcomes. So, we know this principle works. There are at least five reasons why this approach works:

Ideal design teams number five to seven, and they include viewpoints that cover, from beginning to end, the process targeted for improvement. In addition, it is often advisable to include an information technology expert, because IT is an enabler in most innovative solutions.

Include fresh faces. Sometimes those newest to the work can see glitches that others have grown accustomed to, and don’t see. It takes courage to put a future design in the hands of the inexperienced, but new viewpoints are tempered by experienced members and the payoffs can be major.

What about management? We will cover this in detail in a later issue, but involving management directly in a design team means the normal dynamics of relying on managers for leadership, decision, or approval, will dominate, and innovation will suffer.

The challenge is how to have enough management involvement to secure strong support for the innovative designs. No small challenge, but, again, that’s a subject for a later issue.

Beware the Dangers of Stopping and Starting

Please be aware that re-starting a change effort that you’ve aborted (because you weren’t ready) is very difficult. We can help you assess your readiness to start a project with a short phone call. To set up a call, simply send us an e-mail.

To read the rest of the posts in this series on change click on any of the links below:

Change 2: The Importance of Selling the Big “Why”